What is a Moving Violation? 10 Powerful Answers That Will Help You Grasp The Concept 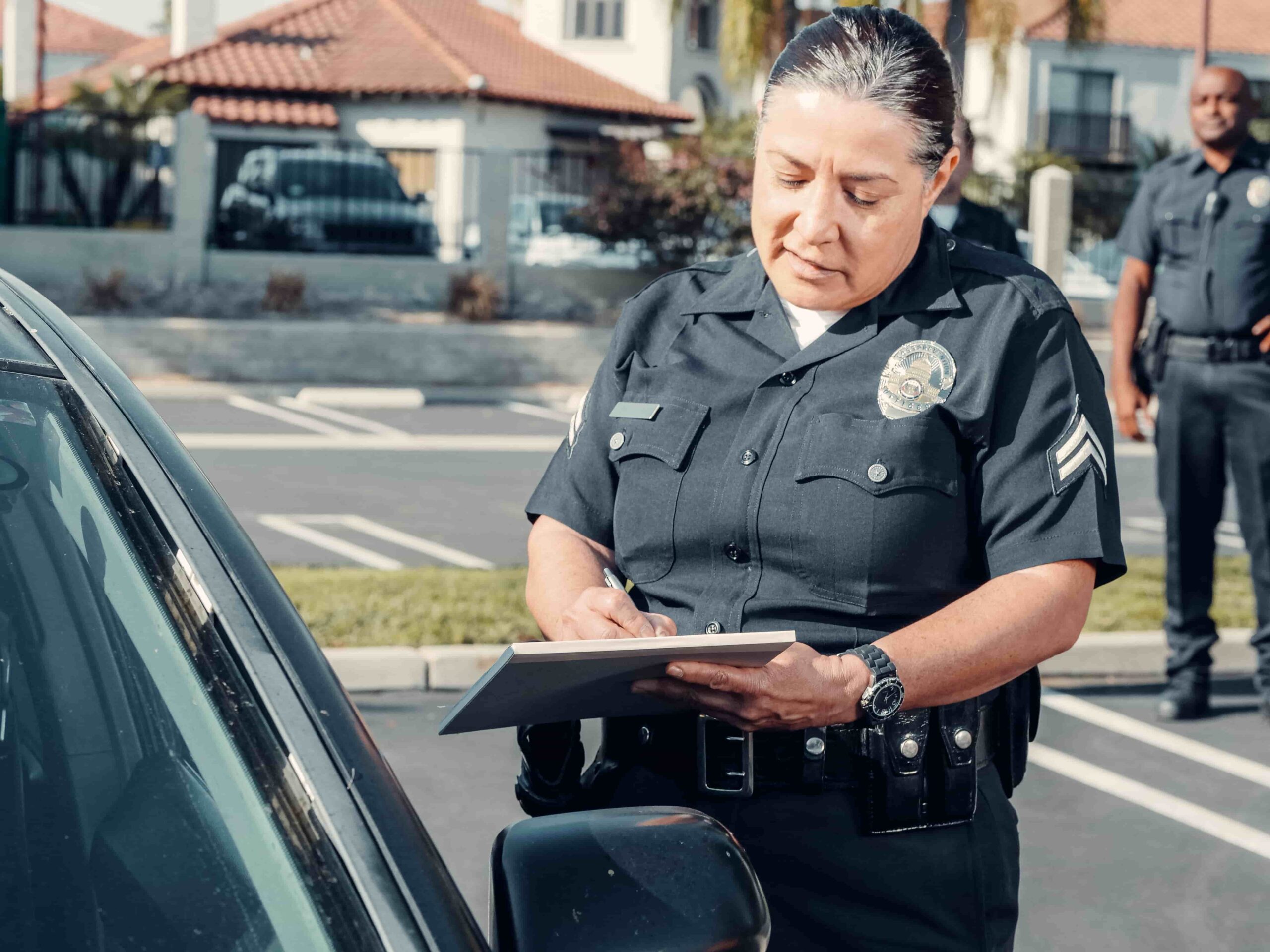 Transportation law violations rank high on the list of most often committed infractions, with punishments ranging from fixed fines and driving instruction to prison time, depending on the severity of the infringement. These statutes deal with movement violations like drunk driving and speeding and violations depending on the condition of a vehicle, such as expired registrations, among other issues.

When it comes to enforcing specific traffic laws, the police agency’s responsibility will be determined by the traffic stop location. Even though these jurisdictions sometimes overlap, each local law enforcement agency has the right to issue citations in a specific geographic area. Therefore, it is recommended that, if you have been charged with a traffic offense, you get legal counsel to determine whether and how best to challenge the charges.

“What is a moving traffic violation?”

Moving violations are traffic offenses that occur while a vehicle is in motion, such as speeding, and are classified as dangerous. Typical moving violations follow the following: failing to stop at a red light, texting while driving, and driving through stop signs. Even though many moving violations may not result in jail time or a hearing before a court, there are compelling reasons to treat them as significant offenses.

Generally speaking, moving violations are covered by state legal codes, albeit the definition of a moving violation varies widely from one jurisdiction to the next. The majority of moving offenses are considered infractions, but some are considered misdemeanors. Criminal charges for the most serious moving offenses are felonies. They include penalties for driving under the influence (DUI) several times, fleeing the scene of an accident, and reckless driving.

The consequences you will be required to defend yourself against will vary depending on the seriousness of the accusation, the categories it fits into, and the extent of damage that the police allege the incident accused of caused to the public. For example, when you are charged with a moving violation, the police accuse you of committing a crime because your car was moving at the time. The penalties you could face if you are stopped for a moving offense are determined by the type of offense the police believe you have committed. For example, if you receive a speeding ticket, you may be required to appear in traffic court and attend traffic school in addition to paying a fine. You could, on the other hand, face jail time, steep fines, license suspension, and other administrative consequences if the police stop you from speeding while under the influence of alcohol.

Traffic offenses are among the most common forms of offenses that people do without even realizing. Traffic offenses are classified into two types: minor and major violations. Major violations are serious offenses with severe criminal fines and repercussions. Individuals accused of a crime may risk incarceration. Furthermore, the charge may result in harsher sanctions in the future because it may be considered a prior offense if the accused person faces criminal charges. Most traffic violations result in points that might lead to license suspension.

However, when you are pulled over for a minor violation, they can expect to pay a fine, defend the violation in court, or, if accessible, use instructional resources like traffic school to invalidate the violation at hand.

“What is a minor moving violation?”

In most cases, a ticket is given for minor violations. The ticket gives the offender two options: pay the prescribed fine, which effectively means admitting guilt, or content the ticket if you believe you are not guilty of the infringement. The criminal will not be arrested or imprisoned as a result of this. They will only be issued a citation that compels them to pay a fine, appear in court, or both. Being found guilty of a minor traffic offense can result in points on one’s driving record as well as potentially increased auto insurance costs. Minor violations include the following:


Speeding has become a significant concern in traffic safety management because it increases the likelihood and severity of traffic accidents. Depending on the state and speed, speeding is one of the most common traffic offenses, whether significant or minor. Most states have an absolute speed limit, which implies that any speed above the limit might result in a ticket. When you are charged with basic speeding, the highest speed is usually ten miles per hour or less over the legal speed limit, which is usually considered a minor offense. A driver can also be ticketed for driving too slowly and hindering traffic flow.

On the other hand, reckless driving is classified as a Class 1 misdemeanor, the most severe misdemeanor category, and thus constitutes a criminal accusation. Reckless driving involves a wide range of moving offenses. In general, this refers to any irresponsible driving action that endangers life, limb, or property while operating a motor vehicle. The most prevalent reckless driving charge is exceeding the posted speed limit on the roads. In contrast to speeding, it merely indicates you were traveling faster than the posted speed limit or faster than the road circumstances permitted. As a result, it is critical to grasp what this entails in both the short and long term and take every precaution to avoid a conviction.

If you want to learn more about fighting a speeding ticket, Law Office of Igor A. Shapiro is here to assist you!

“What is a major moving violation?”

Major violations pose an unacceptable risk, proving to be nothing to laugh at. They are serious infractions that carry significant weight when recorded on an MVR. Although there is no uniform definition of a significant violation because it differs by jurisdiction, you can determine what your state or region deems a major violation by the severity of the penalty for the offense, such as an instant suspension of your license or a high amount of points.

Most states and insurance companies consider the following to be significant moving infractions that can result in jail time and license suspension:

There are a few exceptions for minor violations. Extending the speed limit by 20 miles per hour, as Virginis did, is considered careless driving, which is a six-point offense.

“What is a moving violation conviction?”

It is critical to note that receiving a traffic infraction ticket, such as speeding, is not the same as being convicted. For example, a traffic ticket indicates that you have been penalized for a speeding infraction, whereas a conviction indicates that you have been found guilty of the speeding infringement. The majority of moving offenses are infractions, but some are crimes. The most severe moving offenses are felonies, such as multiple DUI charges, fleeing the scene of an accident, and reckless driving.

When you get a citation for a minor infraction, you have two choices: pay the fine or challenge it. If you consider challenging a ticket, it is critical that you do not pay the fine and instead seek legal counsel. If you pay the fee, you acknowledge guilt, and the conviction will remain on your driving record for the period specified by state law. Furthermore, depending on the offense, you may have points added to your license.

You don’t have to be convicted of a severe crime to lose your driving privileges, as accumulating too many points on your license could result in an automatic suspension.

“What does this mean for the point on your driver’s license?”

In the United States, a point system is a tactic used by courts and state motor vehicle licensing agencies to punish persons who commit the same traffic offense over and over again. In order to identify repeat offenders and dissuade drivers from performing the same offense in the future, law enforcement uses points to track down criminals.

Each state has its own set of rules determining which offenses are penalized by a driving record point and the consequences of receiving one or more points on one’s driving record. If a traffic violation occurs in a state where the point system is used, the state motor vehicle office will record the violation on the driver’s record. The higher the amount of offense, the greater the number of points scored. When a person accumulates a particular number of points, their driving privileges may be revoked or otherwise restricted.

“Can you get arrested for this infraction?”

Infractions, sometimes known as violations, are minor infractions that are usually punished merely with fines and not with imprisonment. Infractions do not involve jail or even probation; thus, people charged with them do not have the right to a jury trial.

However, convicted individuals may face arrest and subsequent jail for certain of the most serious violations: you may face arrest and subsequent incarceration if you are arrested and convicted. If you have ever been charged with a major traffic infraction, you might think about hiring an attorney. It is vital not to dismiss a moving violation citation in either situation, even if the violation happened in another state.

“What happens if you wait or delay actions on a moving violation ticket?”

Suppose you choose not to take action on a moving offense. The courts will mark it as a failure to appear or respond, commonly known as an FTA. If you also pay the penalties, the court will send it to the collections agency and notify the Licensing Department. In that case, the problem will escalate, resulting in more outstanding fines and penalties, loss of access to traffic school, and even the possibility of an arrest warrant.

We hope this information is useful to you and provides insight into what a moving violation is as defined in your state. Law Office of Igor A. Shapiro has assisted many drivers who have faced significant and small moving offenses in avoiding a moving violation conviction. If you want to dispute your ticket, you should start with Law Office of Igor A. Shapiro. Hire us, so you sit back and relax while we do the heavy lifting. We’ll go to court on your behalf and beat your traffic ticket.